I’ve broken my heart numerous times, you know? But I just always tell myself that I will love again and someone’s going to love me, and I have to move forward.

I remember my place back then. The work I put in to try and be the best that I could be. I always look back at those days, you know. I feel now what my dad feels when we’d sit in Tagaytay, have a beer, look at his huge house, his success. My dad’s the most simple dude--he does this in a regular T-shirt of some hardware, those free giveaway shirts, and you could see it in his eyes that he’s so proud of himself. And I can say the same now when I sit here in the house, I was able to build my own roof over my head.

Mom and Dad gave me a really good education, and I’m proud to say that after I graduated I did not ask one cent from them. I said I want to make it by myself. I can feel the same way that my Dad feels. If he just gave me money and all of that, I’ll never be able to feel what he’s feeling. My dad was a policeman in Scotland Yard, he came all the way out here and made a name for himself.

I wanted to do that, for myself, so the best gift that they really gave me was my education. I always tell my son that that’s the most important gift I can give you--aside from my love and my care--is your education, so that I can ensure that you’ll have a bright future. I’m really lucky and blessed to have parents like that. It feels nice when you sit here and you see your hardwork.

Everybody knows about my history with my ex--and that was one of my lowest points in my life because I was really hurt then.

Wooooweeee! It’s tough, man! He’s 16. I was able to get Austin to come over and live with me when he was 14. Teenager na. He didn’t grow up with me, so that makes it hard for me, you know? Everybody knows about my history with my ex--and that was one of my lowest points in my life because I was really hurt then. My son was there to witness all of that.

Now, I have him, he’s studying in Brent. It’s tough, it’s so tough. The kids of today are so different. Are they entitled? You can’t get them off their phones, you can’t get them off social media. It’s like, “God, go out! Enjoy the outdoors. Enjoy nature.” He’s a really good kid, he’s a smart kid. He also enjoys sport, which he got from me. But I really wish I could’ve been there for him when he was younger. He’s from Dubai, and in Dubai, things are very different. He’s doing well in school. He’s one of the popular kids. His teachers say he’s like the energy of the classroom, so it’s nice to see that he’s adjusted really well. But he loves Dubai, he adores Dubai.

You just have to stay positive, and just tell yourself all human beings are designed--we’re all designed to love. You’ll always love again, and someone will fall in love with you.

Yeah, I will. That’s in my 5-year plan, 3-year plan. I just wanna make sure, you know? I don’t wanna rush it. Everyone says that I’m this guy who doesn’t believe in marriage. I go, “Dude, I believe in marriage, it’s just that I’m not gonna rush into it.” I have my father and mother--who have been married for nearly 50 years, so I have the perfect marriage to follow. How many broken marriages do you see in today’s society? Nobody lasts that long anymore. It’s crazy, and marriage is supposed to be ‘til death do us part. But then there’s divorce and all of this stuff, so…

Accept that pain, let it make you stronger, and whatever mistakes that happened in that relationship, learn from it so that it won’t happen in the next one.

I really wanna make sure, and I’m very confident with the relationship that I have now. Like I said, I’m in a happy spot right now, and Andrea really values family the way I do. That’s the first thing that made me fall in love with her, is just how she loves her family. I’m like, “This is going to be so easy. Our families are just going to get along.” And they did. When we introduced them, they just hit it off. There was no effort, no best foot forward, no trying to force the issue.

We met during the show, ["Basta's Ka-Summer Kita"--"As Long as I Summer with You"], and in the show the mom was there every taping day. I just saw how she took care of her mom, and I fell in love with that, because I’m the same way with my mom. I’m building my house now in Alabang, and I’m trying to convince my parents to live with me. I built them the biggest room in the house so that they would come live with me.

GETTING OVER A RELATIONSHIP

You just have to stay positive, and just tell yourself all human beings are designed--we’re all designed to love. You’ll always love again, and someone will fall in love with you. It’s sad when you’ve given so much, and it doesn’t turn out into a happy ending, but you just have to embrace that. You know? Accept that pain, let it make you stronger, and whatever mistakes that happened in that relationship, learn from it so that it won’t happen in the next one.

I know it hurts--it’s gonna hurt yourself, it’s gonna hurt her, but the best thing to do is just be honest with one another. I’ve broken my heart numerous times, you know? But I just always tell myself that I will love again and someone’s going to love me, and I have to move forward. It’s a lot easier, of course, when you have a strong foundation, where you have good friends and family.

And sometimes, over time, you learn that it’s really not meant to be. What are you gonna do?

The worst thing is when you go through a heartbreak and you let that pain consume you, and you turn into a monster and just say nasty things and try to hurt the person that you used to speak so highly of. I find that so immature. That’s why with all my relationships, you never heard me talk crap about that person because there were good memories. The good memories I keep it in here [motions to heart], and the bad memories I just try to forget.

I don’t want to start a family and stay in showbiz. I already know what the showbiz world needs of me--and it is a lot of my time. And if I'm going to have a baby or if I’m going to get married, I don’t want to lose time with them. I wanna spend as much time as I can with them. You know? So sacrifice now, work hard, save up, enjoy life, and enjoy it with my special someone. Then start to have kids and have a family.

You have to step up your game, you have to always evolve so that you can stick around.

I’ve invested in land, a lot of land. The Palawan place is just a family home for the entire family to share. I’ve invested in condos, so for me, it’s a wonderful life when you just have to sit back and collect rent. I’m trying to solidify my future that way, where I have recurring income. I don’t want to take big risks. I also have a business of anti-mosquito that is very effective and it’s purely organic.

WHILE THE IRON IS HOT

You know, especially with how society is changing so fast and people’s attention spans are so short. Kaming mga artista para kaming cellphone na [Us actors are like cellphones]. There’s always a new model, there’s so many talented kids out there coming out. You have to step up your game, you have to always evolve so that you can stick around. But even with that said, it’s just you know, everything changes so fast. One thing’s hot one minute, then boom, it’s gone and then they move on to the next. 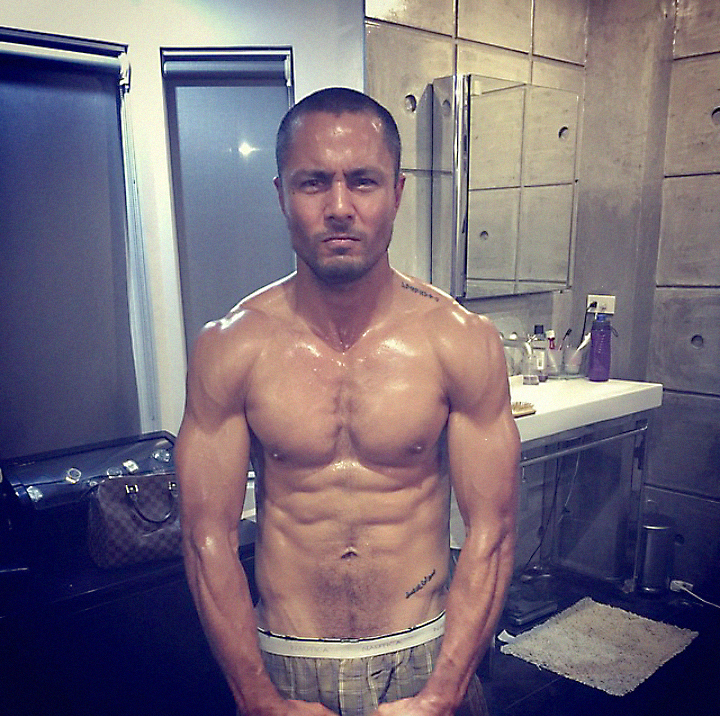 So strike while the iron is hot. Save it up, so you can use that money for other things because this whole showbiz thing, it will come to an end one day. You’re not always gonna be there at the top. Enjoy it while you’re there, work hard, save money--and when it starts to decline, embrace that. And when you enter the next chapter in your life, you enter that next chapter with savings, and it just makes life so much easier.

At the end of the day, I’m going to be me because it makes me happy and I can’t try to make everybody like me.

I really treat it like a business. I love my craft, I love the showbiz industry but I treat it like a business. I go in, I do my work, and then I go right back out and be myself. I get criticized for it--some people say antipatiko ako [unfriendly]--“Ano ba yan si Derek, parang hindi artista kung magbihis.” [“Why is Derek like that? He doesn’t dress like an actor.”] I don’t care.

It will come to an end one day. You’re not always gonna be there at the top.

At the end of the day, I’m going to be me because it makes me happy and I can’t try to make everybody like me. I won’t even attempt to. I will respect everybody, even the people who criticize me and hate me, I’ll respect them. But I won’t try to make people happy, you know? Because you just can’t please everyone. You just have to be yourself, and if people love you for that, cherish those people. If people don’t like you, then just respect that. That’s OK.

A MESSAGE TO HIS 20-YEAR OLD SELF

Hahaha...I’d tell him, just continue being you, man. Always keep your head up high, cos you’re gonna go through some really trying times. But just be strong because at the end of the road is a happy place for you. Like I said, I’m in a really happy place right now, and all the tough times that I went through, they all contributed to my happiness now.

You know when you start so down there, and then suddenly you’re up here, diba ang sarap ng feeling [Doesn’t it feel great?”], because you came all the way from down there? The jump is so big. I’m at the lowest of lows, and then now I’m in just a happy state. That’s how happy I am. I’m really, really, happy with my life. People ask me why I don’t look like I aged, it’s because I’m so happy. I did not let those low times eat me up. Hindi ako manhid ha, umiyak ako. Nilabas ko. [I’m not made of stone. I cried. I let it all out.]

When I found out that I had a son, for me that was a blessing and what happened after that was really tough for me. I got accused of so many things, and again, ang kalaban mo babae [I was going against a woman]...Those were really tough times.

MIDDLE OF A LOVE STORY